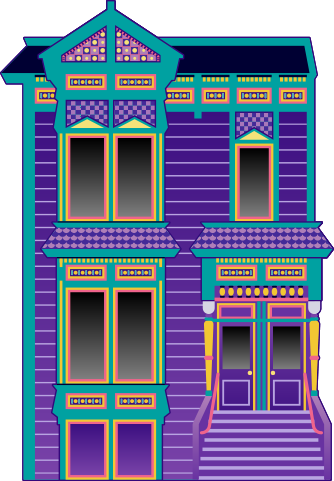 What was The FUNhouse? I use the past tense because The FUNhouse as I knew it has been gone for some time. It's been described as a creative collective, a haven for artists and computer geeks, a party space, and a home. It was all of these things, but most of all it was magic.

The FUNhouse was located at 1663 Turk Street in San Francisco, California. I moved downstairs from The FUNhouse in 1996. I had known the heart of The FUNhouse, Scott Briefer, only superficially before that time and although I had frequently been invited to visit upstairs, a number of weeks passed before I ventured up.

Upstairs was a beautiful, modern flat set inside of a somewhat grungy Victorian building. The exterior was covered in peeling yellow paint at the time. The inhabitants were Scott (not yet known as the Maharajah of Madness), Robert, Kevin, and David.

I don't remember ever being told what the theory behind The FUNhouse was. In a way, its evolution felt natural to me. One of the first events I remember being a part of was a surprise birthday party for Robert. I hadn't been a part of a birthday party like that before. It became my role to paint set pieces that covered one wall in the living room. Since Robert had always shared his birthday with Jesus on December 25th, he'd never had a real birthday party. So Scott decided to give him all the parties he'd missed growing up starting with his first. As the party went on, we celebrated Robert's 18th, 21st, and current birthdays.

This party had a script, actors, costumes, sets, a stripper... you name it. It was impressive and it set a standard for FUNhouse parties for years to come.

But the parties were only one aspect of The FUNhouse. By October of 1996, Robert and Kevin moved to the house behind The FUNhouse and I moved upstairs adding my name to the list of people who called The FUNhouse home.

I was nurtured by that environment. It was there that I formed my philosophies about art under the wisdom and friendship of Scott. And for someone like myself who is more comfortable living in my mind than in open discussions this was a great place to explore human (and personal) behavior. All of those ideas which seem strange to most people were embraced by the people of The FUNhouse.

The family had grown beyond those of us who lived there. People were welcome to drop by at all times. Among the regulars at The FUNhouse were Arnaud, Patrick, Annabel, Mike, Jonathan, Nick, Chris, Vincent, and others. Everyone who was welcomed into the family took care of The FUNhouse by contributing talent and energy to the events, voice to the conversations, and by cleaning as it was needed. It was like a commune. Word spread about this place called The FUNhouse where all were welcomed and none were judged. No one was turned away unless they were harmful to themselves or others. I think in all the years The FUNhouse existed only one person wasn't welcomed back.

This kind of group consciousness was important for the life of The FUNhouse. The physical space wasn't thought of as "Scott's" with us hanging out. It was "ours" and everyone helped The FUNhouse grow.

1996 to 1997 was, in my opinion, the Golden Age of The FUNhouse. The exterior was painted in the "lipstick and lollipops" colors that became the symbol of The FUNhouse's energy. We held charity events, birthday parties, and IRC parties which featured people from another family we had formed over the internet. Much of the word about The FUNhouse's activities was spread via modem. Today, if you ask someone from "old school IRC" about The FUNhouse, you'll usually get a far-off look and a smile before they answer.

I'm sure there are people who want to try to recreate The FUNhouse. This should be easily done as there are no set rules, but it's more difficult than one would think. Two of the most important elements necessary for these kinds of living entities are openness and respect. If the people involved don't feel respected or free to be open, then something like The FUNhouse falters.

As is the case with all magic, The FUNhouse came with consequences. With such openness also came drama, and I hadn't developed my skills for dealing with it yet. In mid-1997 I moved out of The FUNhouse.

Luckily, Darrel (Duckie) moved in and the spirit of The FUNhouse was maintained by someone who believed in its importance as much as the rest of us did. The FUNhouse thrived. I maintained contact as a FUNnie (the title bestowed upon us by The Maharajah) and continued to enjoy the growth, the music, the food, the ideas, the collaboration, the passion, the creativity, the freedom, and the friendships of The FUNhouse though I didn't live there anymore.

By 1998, David had moved out and Randy moved in. I moved again and this time I was living around the corner from The FUNhouse. In May, I graduated from art school and The FUNhouse was host to my first (and in my opinion my best-presented) art show.

Dates from this point on become sketchy. Duckie and Randy moved out and Alex and Aly moved in. This was the beginning of the decline of The FUNhouse. Although they had been told what The FUNhouse was, they didn't have sufficient spirit to keep it alive. The FUNhouse, once a welcoming haven to many became cold, closed, sterile. And worse than this, the new roommates seemed to lack respect for Scott. The ideal of welcoming all into its doors backfired by welcoming those who didn't understand the care and love that was needed to keep The FUNhouse living and growing.

This saddened many. For a while, some of us hoped that The FUNhouse was merely resting and would one day make a full recovery. Eventually the roommate dynamic changed again, but the true soul of what was The FUNhouse was too far gone. It lived in memories, in hopes, in stories, but it had passed out of the state of being "current."

Am I sad that The FUNhouse has passed into legend? Not really. Part of being a fixture there is understanding the concept of eras and that eras are ever-changing. Once The FUNhouse's era ends, there's a chance that something even grander might emerge. Somewhere.

So what was The FUNhouse? It was many things to many people. For me it was a unique experience of highs, lows, and in-betweens. It was a nest, a womb, a chance to explore Self. It was fun, difficult, challenging, joyous, and sometimes profoundly sad.

And I wouldn't have traded it for anything.